How to… work with multiple reactions. Part 2: Mobile apps

Recently, we launched the first part of the series on working with multiple reactions and together created an online store with an automatic carousel and an adjustable shopping cart. This time, we’ll build a mobile app and make the most out of limited screenspace while still creating impressive prototypes. In Pidoco that magic happens with the use of extended interactions.

Let’s have a look at today’s example: a mobile app that lets you click through images, like them and create a favorite list. To give you a little inspiration, here’s what my finished project looks like. The app called “Live there!” includes a tab panel with several images of rentable houses on the start page. Those images can be liked, and additional information is displayed with a tap on “Show more”. Reservations can be requested and a click on the heart icon adds the selected house to the favorites list. All the liked images are listed on the page “Favorites” and of course can be edited and removed from there again. A small overlay on that page gives additional information simulating a feature update and disappears after a few seconds again.

And here is how it goes …

We start with the basic structure of the app by adding the content to the start page that is supposed to be sticky. Here I used a status bar at the top, added a navigation bar from the pre-designed templates and added some text and a few icons. 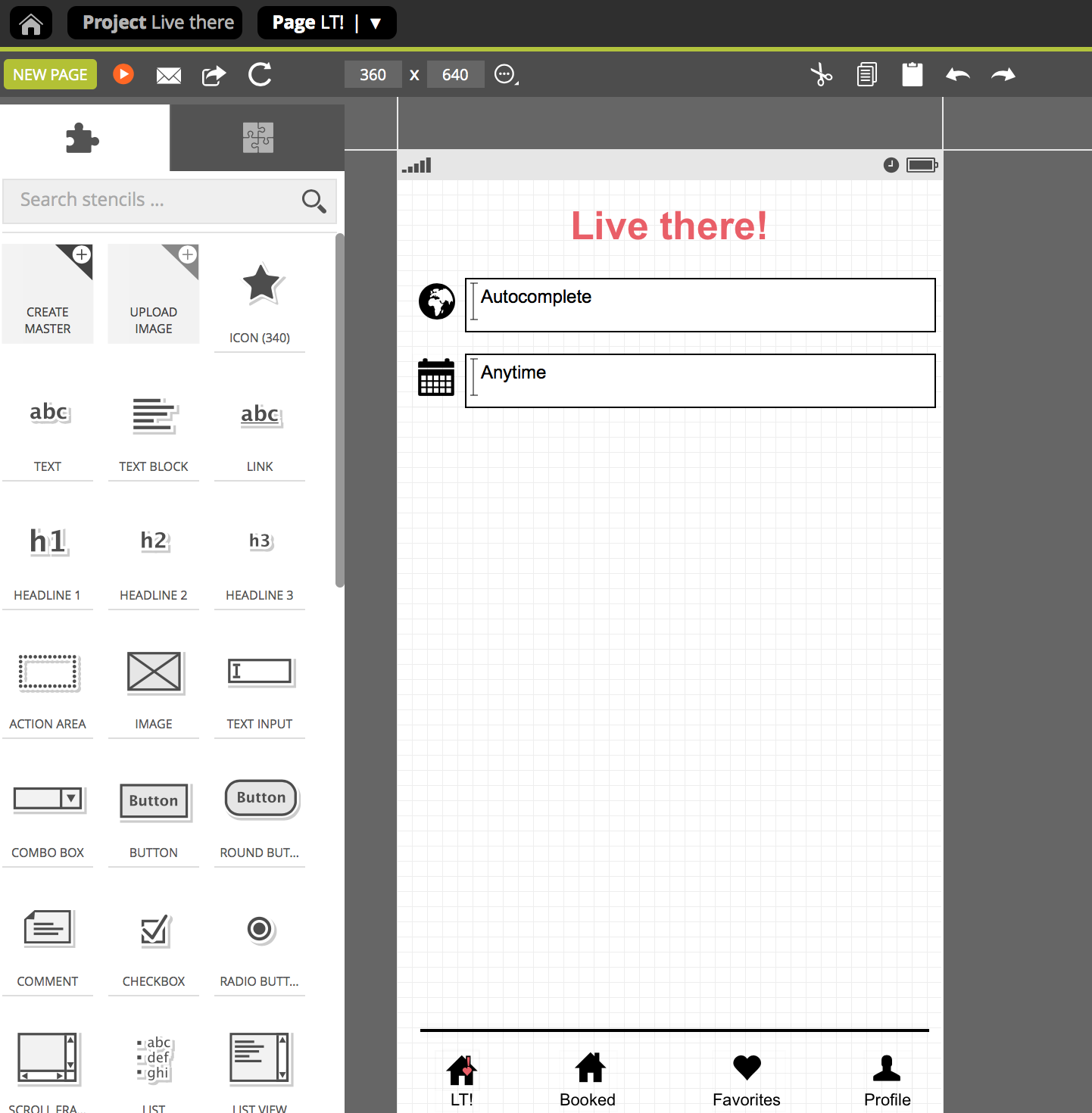 Hint: We’ll need several pages for the app – one for each navigation bar entry, one for the calendar and one for each real estate image that will be displayed with a click on “Show more”. The quickest way is to duplicate the page in the Project View.

Next, we need a second layer to add the “unliked” state of the left image. Here I used a heart icon without fill color and placed it at the upper right corner of the image. As this is the default setting of the image, we activate that layer in the layer panel. 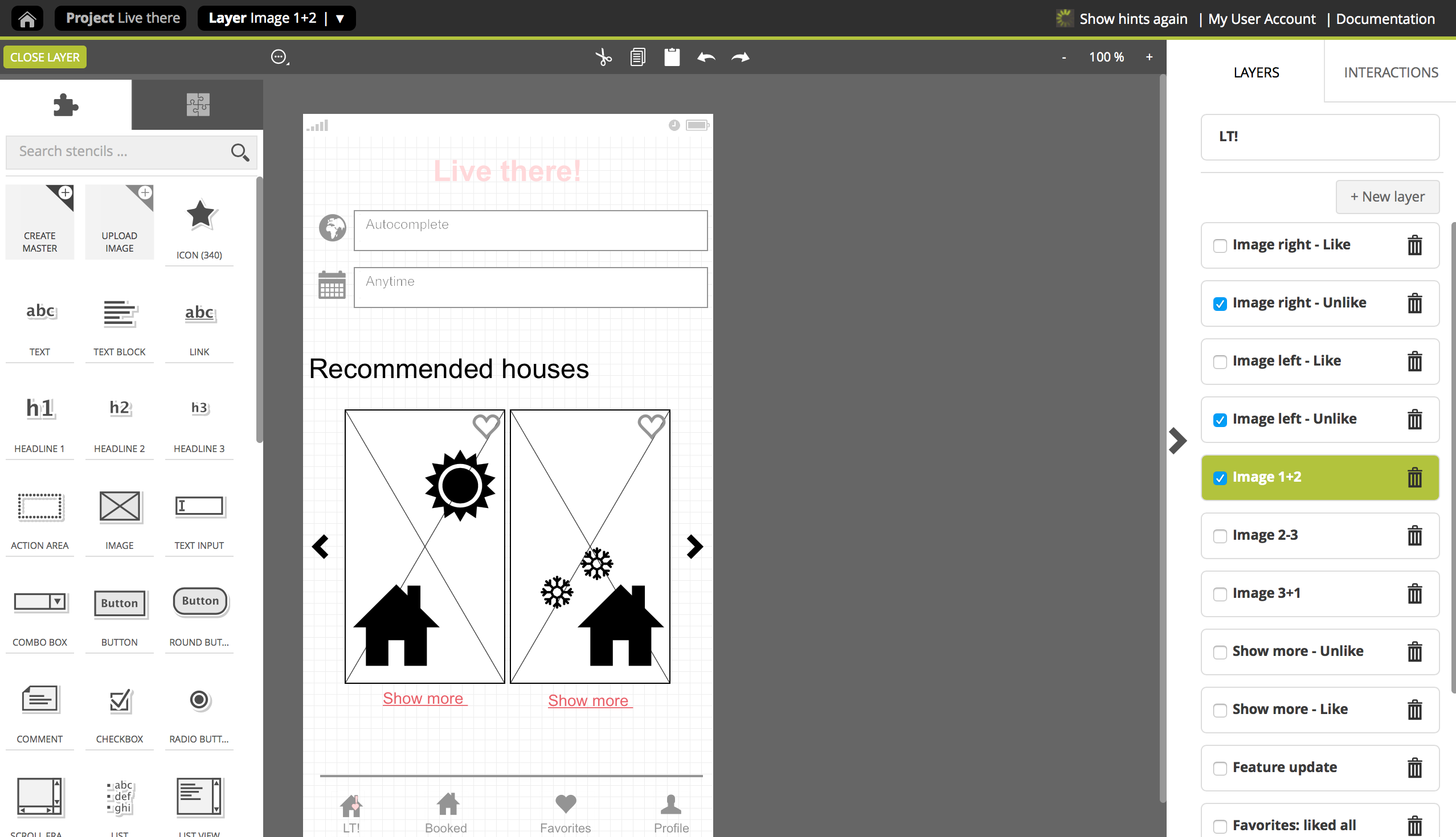 Finally, we add the third layer to show the “liked” state of the image. You can copy the content from the previously created layer and only change the heart icon to a filled heart by clicking on “Change” in the context menu and selecting the right icon. Here I changed the color from black to red. 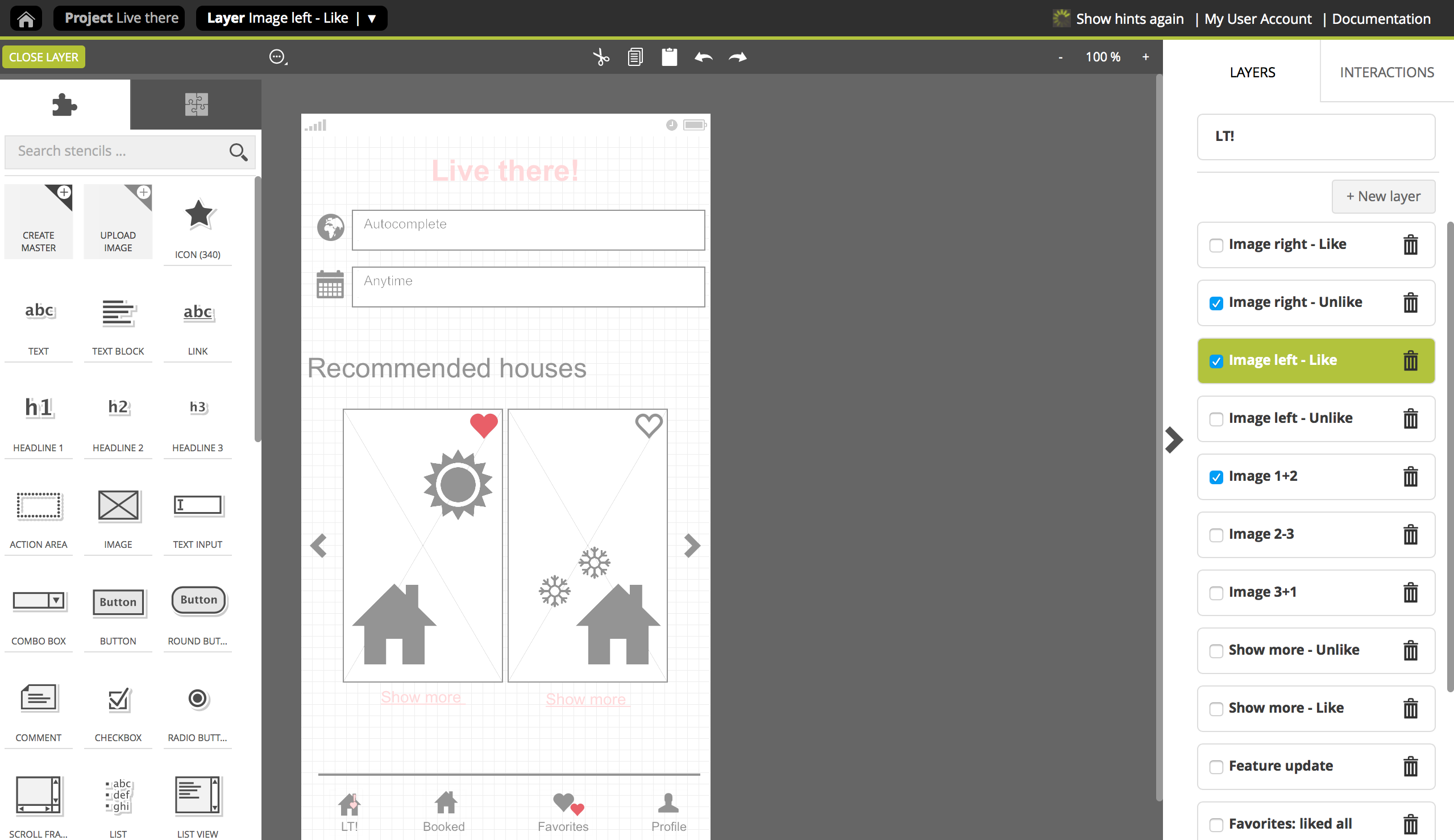 On layer four and five, we do the same as in layer two and three for the right image.

All that’s left is adding interactions to the images to make the heart change from white to red after a double tap. Each image can have one of two states: liked or unliked. So we open the interaction dialog of the image (right click) and add the an interaction with the trigger “double clicks/taps” and the reaction “change layer visibility” for the layer “Image left – Like” with the visibility set to “Toggle”. This will make the heart with the red fill appear, but we also need to hide the empty heart, so we add a second “change layer visibility” reaction with visibility set to “Toggle”, but this time for the layer “Image left – Unlike”. Voilà – done. 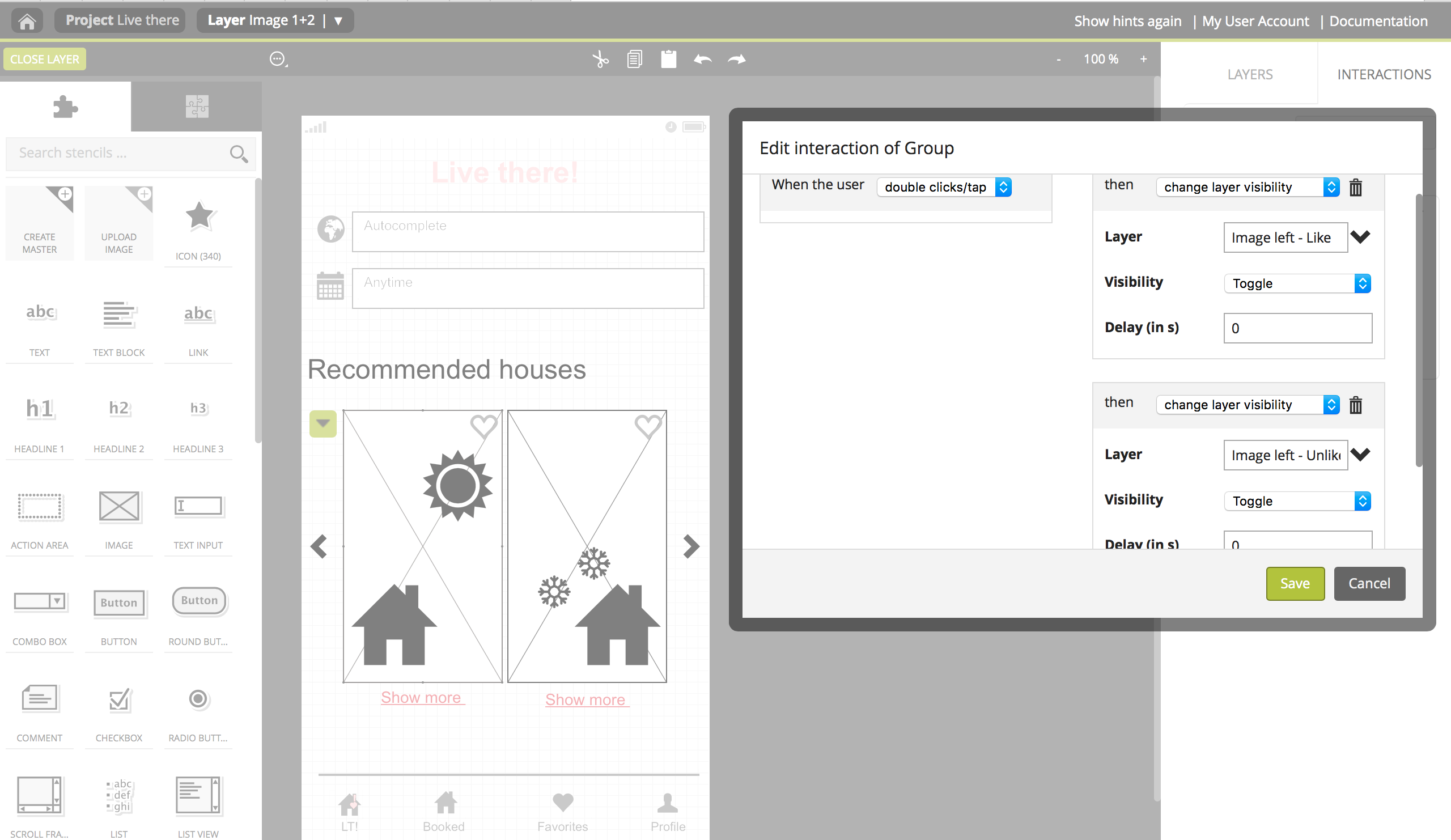 Repeat this step for all the other images that you want to add to the app.

Goal: An overlay pops up after the page has been opened and disappears after 5 seconds.
Ingredients: Here only 1 layer and one page are necessary.

Once more, we need a new layer which contains the overlay that shows up for 5 seconds after the page “Favorites” has been loaded. Here: I added a grey rectangle and some red text. To make the overlay appear on page load, right click on the page to open the page context menu and in the “Interactions” tab add the following interaction: When the user “loads the page” then “change layer visibility”. To make the layer disappear automatically, we add add a second “change layer visibility” reaction, set the visibility to “hide” and specify a delay of 5 seconds. 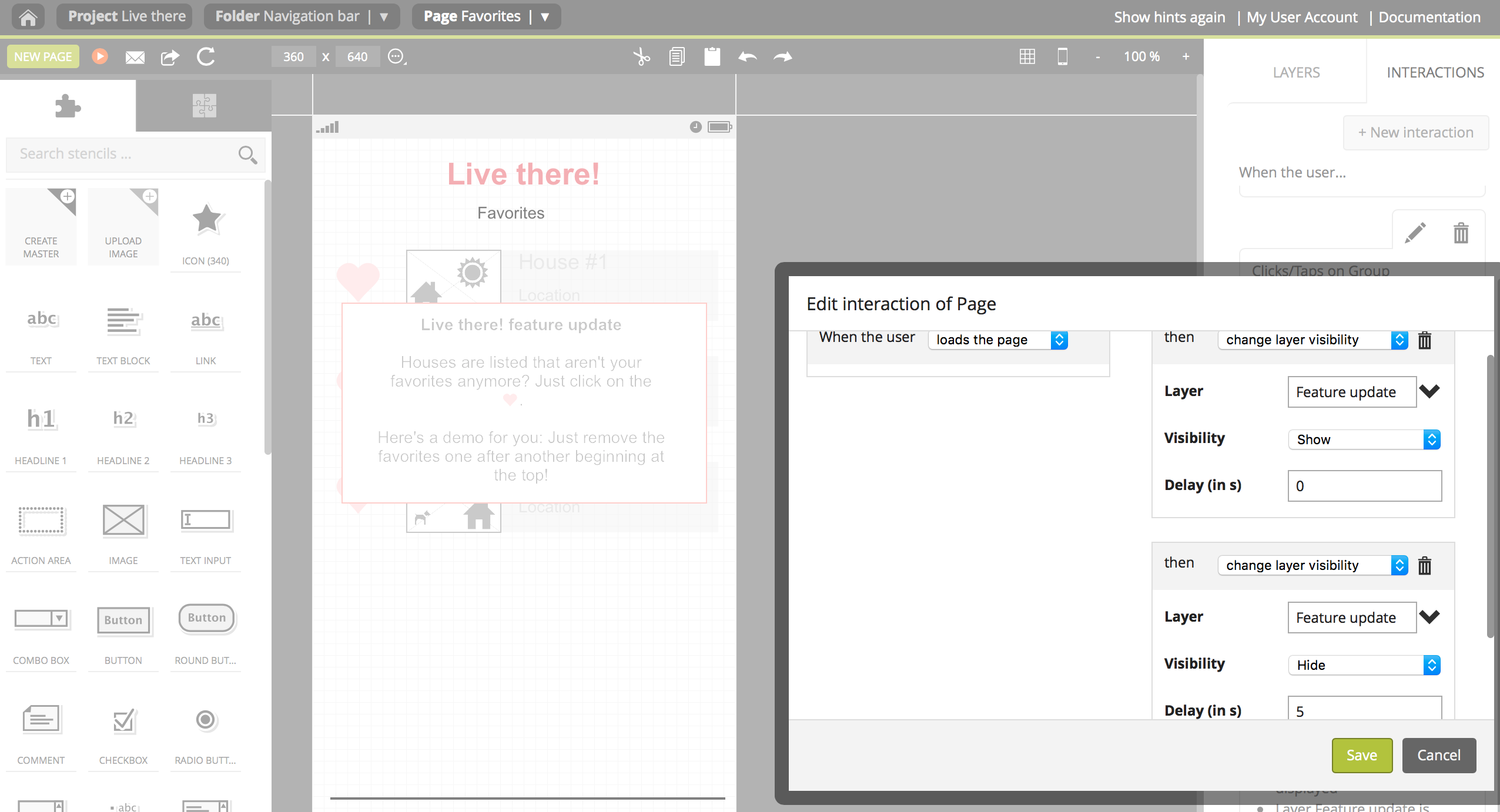 Building an overlay and make it automatically disappear

Goal: With a swipe gesture, previously liked images can be removed from the favorites list.
Ingredients: In total, 4 layers and one page are needed – one to display all liked images, one to show a text when there are no favorites yet, one layer for one and another layer representing two favorite images on the list.

We start off creating the layer that contains the list with all possible entries of the “Favorites” list. Here I added a heart at the beginning of the row, an image and some explanatory text. The entries can be removed from the top to the bottom with only one swipe gesture. For that swipe gesture we add an action area covering the area in which the swiping is intended (e.g. the space at the right side between the image and the frame). Then we add a “swipes” interaction to the action area with the direction “left” and a “change layer visibility” reaction for the current layer with the visibility set to “hide”. But we need another reaction, because the next layer that contains 3 instead of 2 favorites needs to be displayed at the same time. So we add another “change layer visibility” reaction, select the layer with 2 items and set the visibility to “show”. 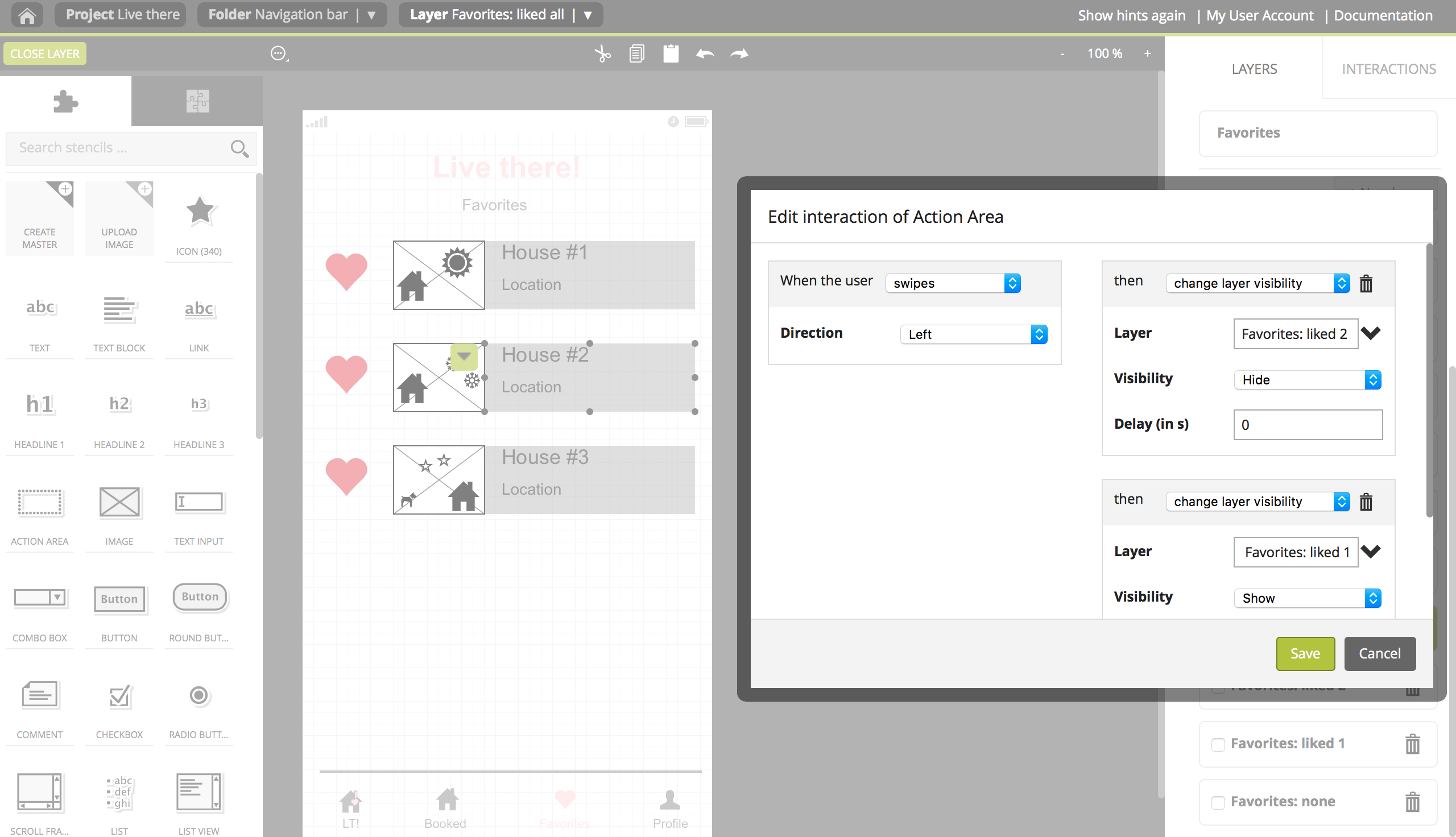 Repeat that step for each entry of your favorites list.

That’s it! You just finished the last part of the mobile app.