How to … work with a grid system in Pidoco

A little while ago, we introduced our new grid feature. The grid feature was inspired by the wide use of grid systems in design and development and helps you

Basically, the grid consists of customizable columns that contain all your site’s content and help you align elements easily. A “snap-to-grid” function makes aligning even easier.

1. The grid system in Pidoco

Working with the grid is simple: Just open a page of your project and click the “Show Grid” link above the canvas. The grid icon next to the link opens the dialog that lets you adjust your grid settings: You can set the number of columns, the gutter width between columns (to give the columns some padding), as well as the margins on either side of the grid. Finally, the grid width serves to define the total space available to your design and acts as an overall container that is centered relative to the device screen (much like the container concept in common grid frameworks). A grid preview right underneath the settings helps you choose the right values. Smart defaults will get you started right away.

Activating the grid in the Page view

Since you may already be used to working with grid systems, here are some recommendations for settings corresponding to defaults in widely used grid systems you might want to use.

You can recreate the 12-column layout of the 960 Grid System exactly by using the following grid settings in Pidoco: 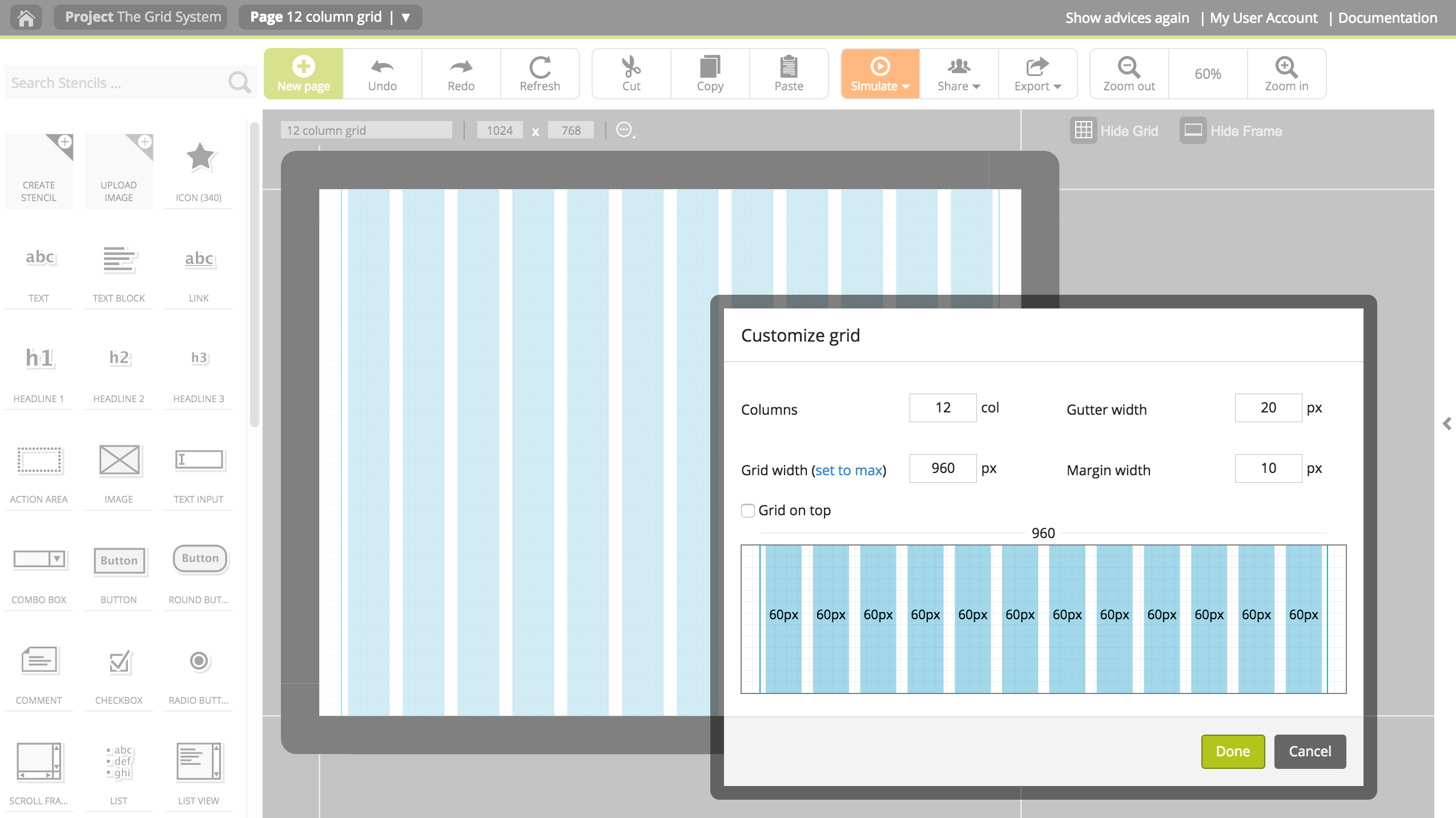 To work with the 16 column variant, you can use the following settings:

3. Working with the Bootstrap Grid System

Another commonly used system is the Bootstrap grid system. This grid system takes into consideration that modern devices come in many forms and shapes ranging from very small screens (like on smarphones) to large widescreens (like many current laptops) and allows developers to easily plan for responsive scenarios with a “mobile first” approach. Depending on the target device size, there are five grid tiers with increasing container width (the container width describes what portion of the screen is actually reserved for the content and essentially corresponds to the grid width in Pidoco):

The Bootstrap grid system assumes an additional margin of 15px on either side of the content, so the effective container width actually comes out to  be 30px wider than the specification lists, e.g. 1170px for the XL variant. If you work out the exact numbers for, say, a 12 column grid, you will find that this results in half-pixel dimensions (e.g. 97.5px in XL). Modern devices deal with this through their rendering engines, but since Pidoco only uses full pixels for projects, you need to approximate the default grid tiers. Here’s how…

To use the XL grid size (container width including margins of 1170px) in Pidoco projects, we recommend the following settings:

Using the Bootstrap XL grid tier on a website project

You certainly will have noticed that is does not exactly fit the default column width of 97.5 px as prescribed by the Bootstrap specification. That’s why we approximated the settings with a column width of 97px, resulting in a grid width of 1164px and thus a deviation of 6px compared with the Bootstrap container width of 1170px. (Note: We recommend erring on the side of less space when designing, but if you would rather have 6px more, just set the grid width to 1176 px.) 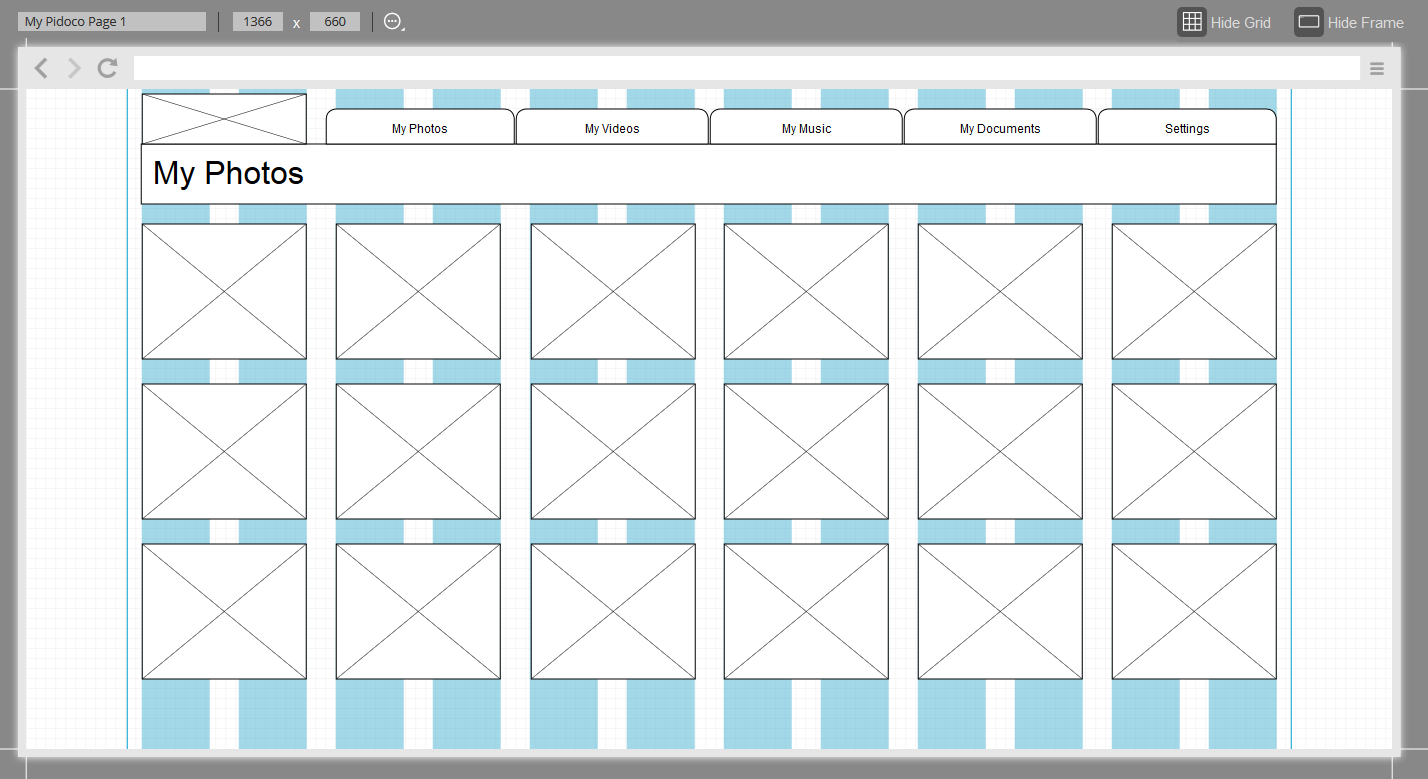 That’s it! You have successfully applied a customized grid to your Pidoco project!

To spice up the summer, we have just released some new features and improvements. Here’s what’s new…

Tired of copy/pasting multiple repeating elements to fill your screen? With our brand new “smart duplicate” feature, it is much easier to create a series of tabs, an image grid or a row of buttons. Simply duplicate, and Pidoco will do the positioning for you. Of course, you can adjust where necessary. 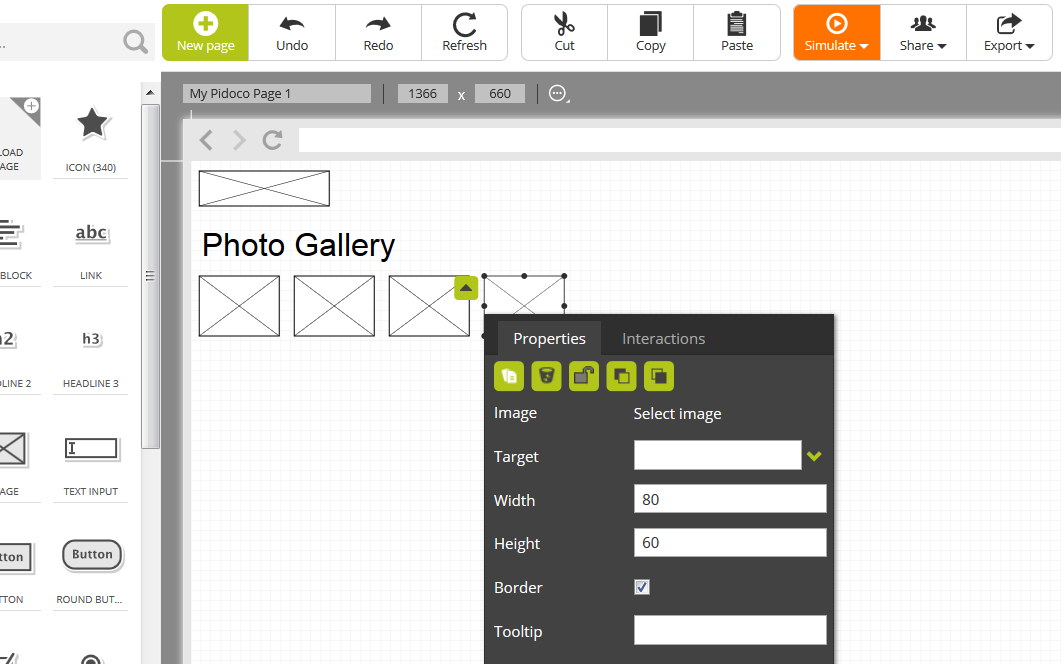 Smart duplicate: Pidoco does the positioning for you

Ever wondered which elements are clickable? Wonder no more. With the new “interaction highlighting” you can simply press the Ctrl key and all elements with interactions attached will light up. Keep the Ctrl key pressed to open multiple target screens in new tabs. 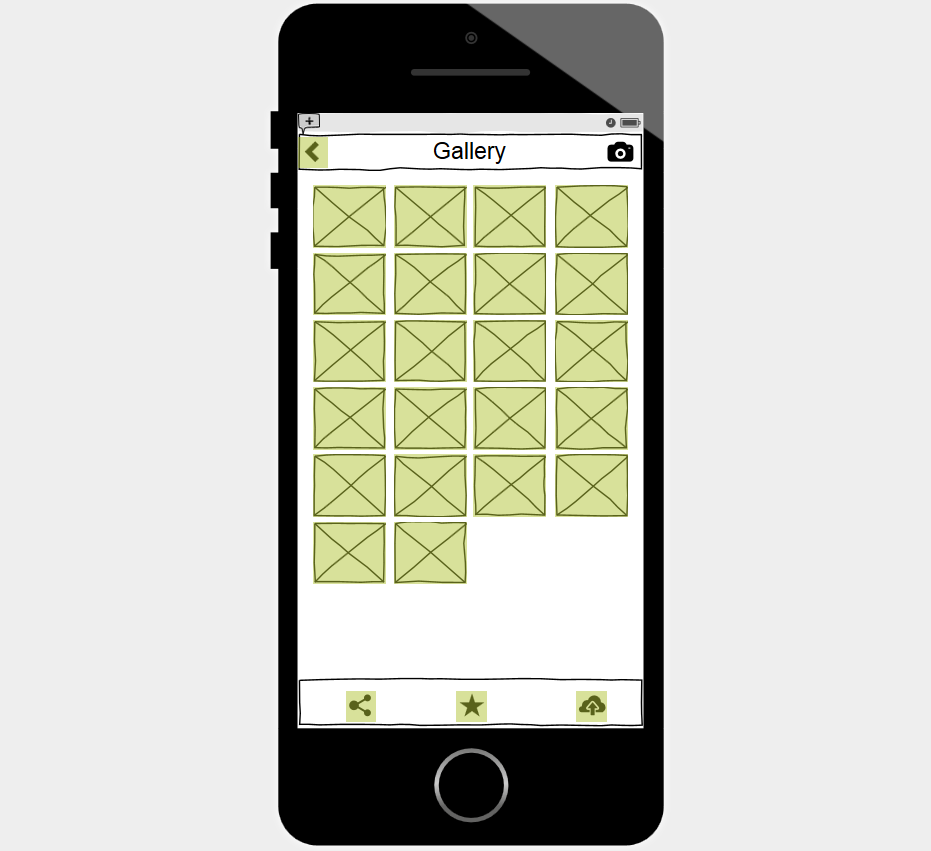 We updated and improved the grid feature which we introduced earlier this year. Now, aligning elements feels much smoother and is faster than ever before. Give it a try! 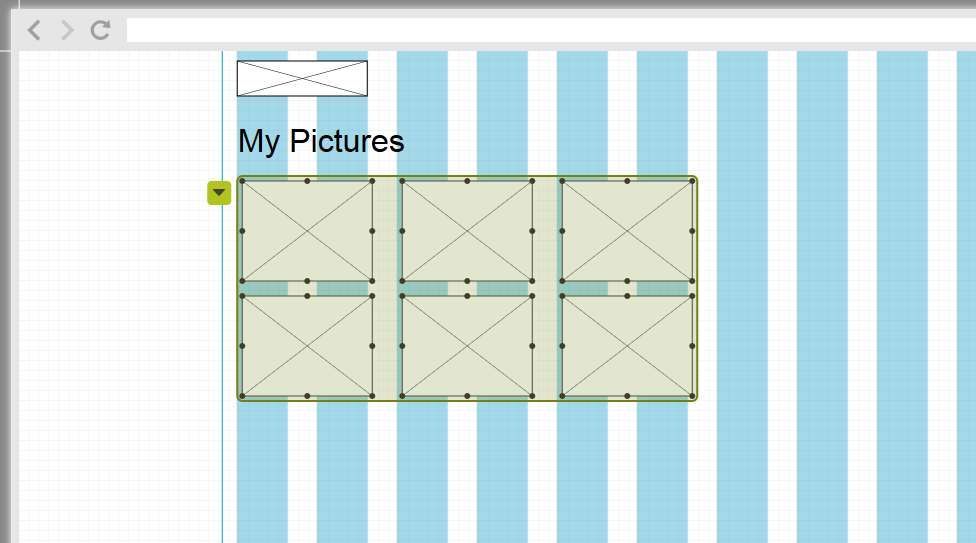 Let us know in the comments what you think!

By the way, we run monthly usability tests. If you’d like to join, just send us a quick email to support@pidoco.com and we’ll be happy to provide you with more information. Stay tuned for more!

PS: Not a Pidoco user, yet? Why not register for a free 31-day trial today?