At Pidoco we constantly work on improving your prototyping experience by listening to your feedback. One frequent question has been “Why is it not possible to design web and mobile prototypes in one project?”. Well, your wish is our command, we have merged mobile and web prototypes, and here it is: the all-in-one prototype!

As of today there is no functional differentiation between web and mobile prototypes anymore. This means you can create pages for all kinds of devices and screen sizes in just one prototype. The change reflects recent design trends, namely it will allow you to prototype responsive designs much more easily.

The new all-in-one prototype makes things a lot easier: Now when going to My Prototypes, there will only be one button to create a new prototype. While you can still pick a default page size when creating a prototype, you don’t need to worry about whether you want your project to be a mobile or a web/desktop project anymore. A click on the button will immediately open the new prototype in the Prototype View. Hovering over the button will let you pick a default page size by selecting your standard device (web/desktop pc, smartphone, 7″ tablet or 10″ tablet). Naturally, you can still adjust each page’s demensions in the prototype, but the default page size will reduce manual work. 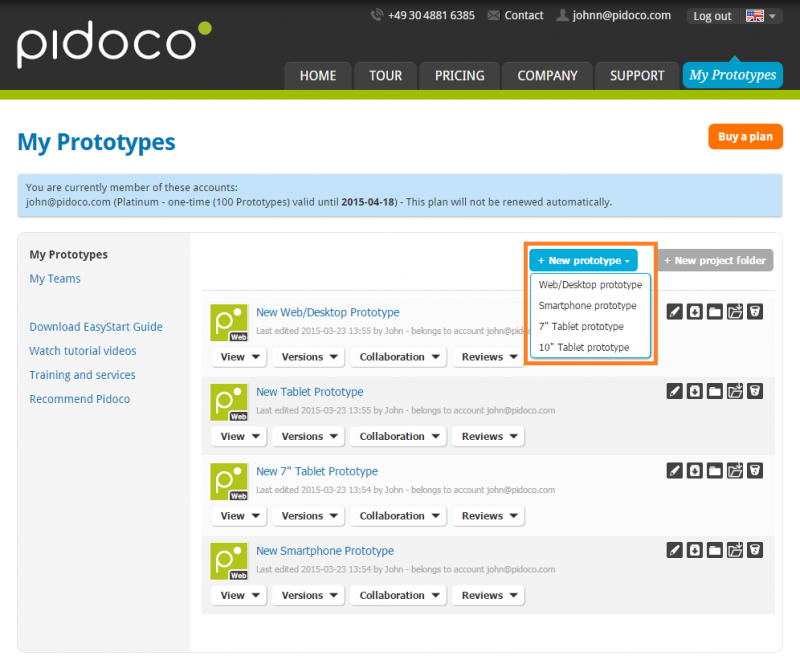 Merging of web and mobile prototypes: The new all-in-one prototype

Another great thing about the new all-in-one prototype is that the elements in the mobile and web/desktop stencil palettes have been combined to give you a much wider range of building blocks for your prototypes. This also includes options like rounded corners in you prototypes.

Additionally, the simulation in the Pidoco app, which is available for Android and iOS devices, has been enabled for all your prototypes, even for the previously created web prototypes. This also means that the mobile sharing option is now available for all prototypes, no matter when they were created.

By the way, did you know that you can submit your ideas in the Pidoco Forum? Simply make a suggestion and all other users can vote on it. Our developers will comment and keep you updated on the status of your suggestions.

PS: You are not a Pidoco user, yet? Why not register for a free 31-day trial today?

Inline Editing And In-Text Linking With The New Text Stencil

For a while now, one of our most frequently requested features has been a text stencil that’s easier to handle. Today we’re proud to say: Voilà, here it is! As off today, creating prototypes in Pidoco will be even easier than before, with a text stencil, which is more powerful, easier to use and, most importantly, includes new functions like inline editing and linking.

Inline Editing: Up until now, editing text in Pidoco required you to open a tiny text editor window in which you could edit the text, but you would only see the final result after closing it. With the new text stencil, you can now enjoy direct in-place editing of your text elements, which lets you see formatting and other changes as you type.

With the introduction of the new text stencil, we are also getting rid of the distinction between “Plain text” and “Styled text”, a choice you had to make before. From now on there will only be one type of text that can do it all. Now, when adding a text stencil to your canvas or editing text, a toolbar will appear directly above the text, giving you easy access to all available formatting options.

In-Text Linking: The new text stencil makes it easier to place links into your prototypes by allowing you to directly insert a link into any part of the text. You can either link to other pages of the prototype by picking a target page from a dropdown or link to an external URL.

Improved Auto-Sizing: Another novelty is the auto-resizing of text elements. The new text stencil automatically adapts its width while you type and has been optimized to require less manual resizing. Of course, you can still resize texts manually, if you need to. 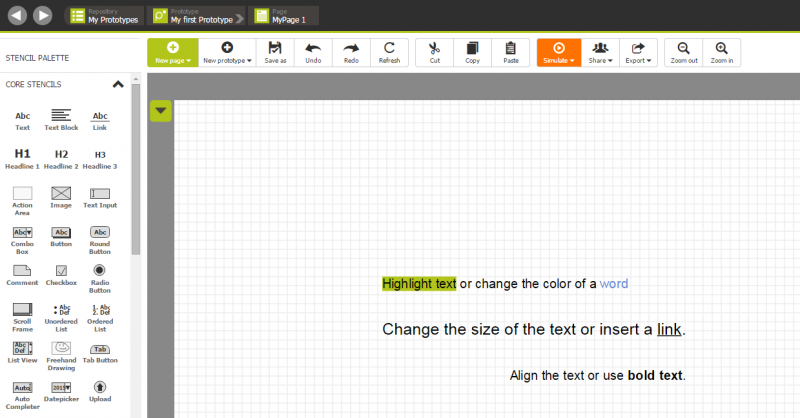 Optimized Output: Finally, we have also reworked both the simulation of the prototype and the specification export to make your work shine. 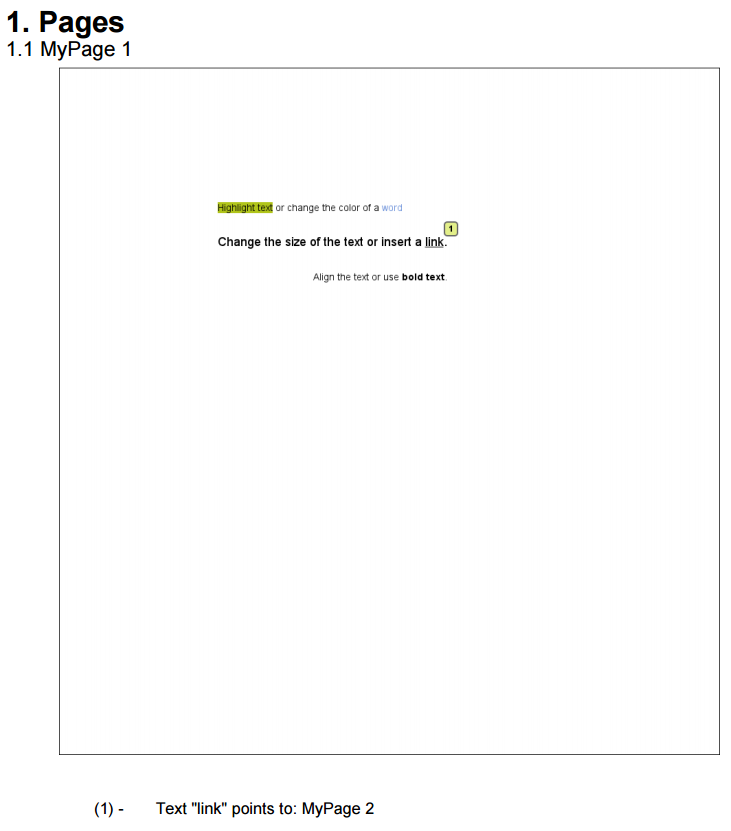 The above improvements also apply to text-base stencils like headlines, text blocks, or links, which are now based on the new text stencil and can be edited with only a few clicks.

All your previously created prototypes, using the old text stencil and the text types “plain text” and “styled text”, will still function like before and remain unaffected by the recent improvements, save the optimized simulation and exports. Existing text elements can still be edited like before. All new text elements, however, will be created using the new text stencil.

Think of the hours you’ve spent sprawled on the floor constructing your own toy brick masterpiece. Now think of the last time you transformed one of your ideas into a prototype. Notice any similarities? Well, while interlocking various bricks and adding elements to prototypes recently, I noticed that both have much in common. Here are my Top 5!

Let’s face the obvious: toy bricks are accessible to everyone. There is no such thing as a limit. There’s no restriction to age or skills, even though there are different sets and special editions available, including rather complex or technical lines. Basically all you need to have is the fascination for toy bricks. The rest is easy and comes from learning by doing.

Prototyping is quite the same. While there may be differences between prototyping at different levels of detail (low vs. high fidelity), prototypes can generally be created quickly and intuitively with the right prototyping tool. So you don’t need any specific skills, especially no programming skills. When creating a prototype maybe the only limit is your imagination…

See how to use the Pidoco prototyping tool

With toy bricks it is virtually impossible to exhaust your creative potential. Toy bricks bubble over with versatility. Every set consists of specific toy bricks. Although they usually come with instructions you can follow step by step, nobody keeps you from doing it your own way. So you can go ahead and invent your own construction, mix bricks from various sets or even build an entire house. Just create your very own masterpiece!

A entire house made of toy bricks

Prototyping represents the same kind of creative process. Working with a prototyping tool gives you a ton of creative freedom. Although most prototyping tools come with a predefined set of elements, such as buttons, menus, combo boxes, video bars or plenty of icons, they hardly limit you in what you can build. By combining elements in new ways or by adding interactions, device motions or touch gestures, new possibilities open up. It doesn’t matter whether you are prototyping a website, mobile apps or a piece of traditional software.

Playing with toy bricks, no doubt, is great fun, but probably one of the main reasons you spend hours searching for the right brick while letting them prick your knees or feet, is that you simply like creating things. Thanks to this passion, you can build objects that are not just a quick construction, but may include highly-specialized technical details. As with almost all things, your best constructions probably involved a lot of trial and error: constructing, de- and reconstructing your object until you were happy with the result.

Mocking up a future product is quite the same iterative process. You may be a creative whiz, but most prototypes will take a number of iterations before they pass the usability test. With the right prototyping tool, this will be no problem at all, since it will let you go through various versions of the prototype, allowing you to modify and redo certain parts without having to do it all over again. In the end your prototyping masterpiece will likely meet UX requirements and exceed customer expectations.

One of the most amazing things about toy bricks is the interlocking! Not only that you can virtually use them forever, as they will still interlock with the newest pieces, even if bought many years ago, you can also put the bricks together really fast. It only takes a few minutes to pile up your bricks and to plastically present your latest idea.

Prototyping is quite similar! The predefined building blocks found in good prototyping tools allow you to mock up an idea with only a few clicks. Even adding interactivity or animations to breathe life into your prototype can be done in a few minutes. Often, this is much faster than coding it. But the real time-saver is when you need to adapt a prototype due to changing requirements or feedback from usability testing: Instead of having to rewrite your code, you can simply move elements around, add or remove a page, relink and voilà – there’s your new version. 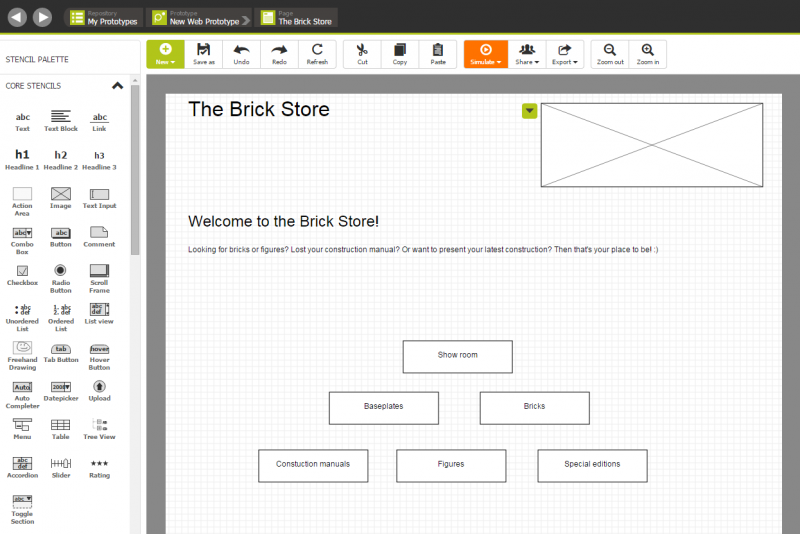 Prototype of the Brick Store

Playing with toy bricks is a great way to spend a day – no matter if you are a child or a grown-up. Most of all, toy bricks are a multiplayer activity bringing together friends and family. That’s basically the same with prototypes. By sharing them with your colleagues or other stakeholders, the whole product family gets united on the virtual play carpet. Not only can people easily get directly involved in the prototyping process, enabling them to put thoughts into images rather than just words), but everyone can also easily understand the prototypes, which empowers them and fosters vivid dialogue and discussions on the work in progress – usually leading to better results. 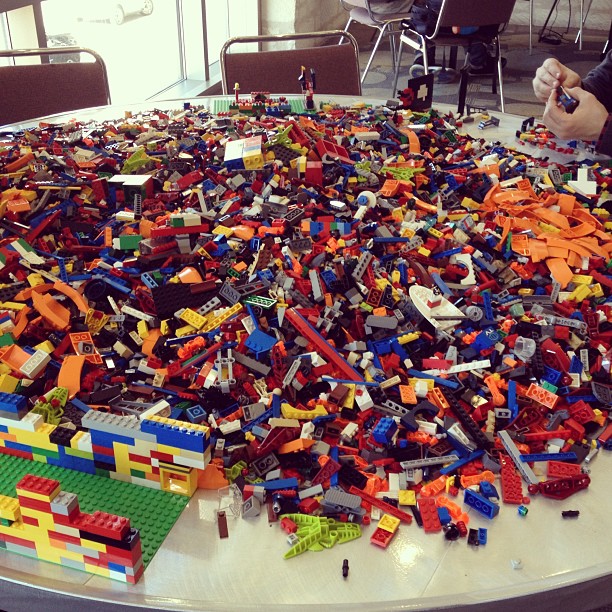 Unlimited collaboration with unlimited options
(Photo by designmilk, 2013. under the terms of the Attribution-ShareAlike 2.0 Generic)